A delegation of Enterprise Greece, the official investment agency of Greece, arrived in Tripoli yesterday to participate in the Libya Build International Fair in the Libyan capital and to further bilateral business relations between the countries. The Enterprise Greece delegation headed by Kostas Fragogiannis, the Greek Deputy Minister for Economic Diplomacy and Openness, and it includes Ioannis Smyrlis, Secretary General for International Economic Affairs, Professor Ioannis Chrysoulakis, Secretary General for Greeks Abroad and Public Diplomacy, and a number of Greek business people who are participating in the Enterprise Greece mission. The visit was organised in partnership with the Greek Ministry of Foreign Affairs

According to the Greek newspaper, Tribune.gr, the Greek delegation attended a reception in Tripoli hosted by Kanakis Mandalios, the President of the Hellenic Community of Benghazi, and Antonis Kaphantaris member of the Hellenic community of Tripoli, and in the presence of the Greek Consul General in Benghazi, Achilles Rakinas. Professor Ioannis Chrysoulakis described it as a "moving reception in Tripoli, Libya, by our expatriates." 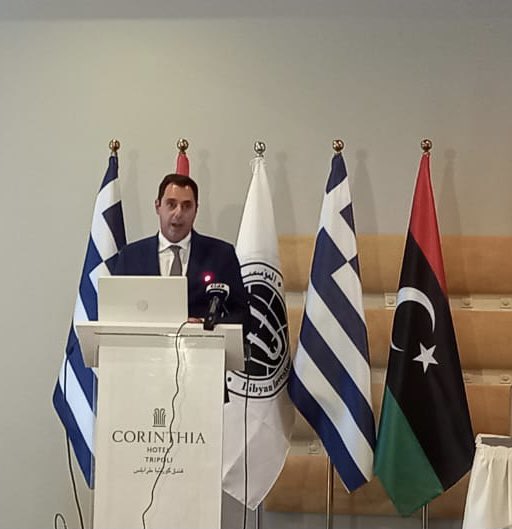 On Sunday the delegation met with Deputy Foreign Minister of the interim Government of National Unity (GNU), Omar Katti, and also signed an MOU for collaboration between Enterprise Greece and the Libyan Investment Authority (LIA) at the Corinthia Hotel in Tripoli.

The LIA said in a statement that it hopes to further cooperation with international organizations and institutions and assist international investors to enter the Libyan market.

The statement said the agreement with Enterprise Greece would create investment opportunities for the two parties particularly in renewable energy, exchange of industry know how, and empowering and training Libyan nationals.

"The MoU also aims to facilitate and enable the Libyan investments in European and international markets. As well as encourage investment opportunities inside and outside Libya and to benefit from global expertise," said the LIA.

They also took part in a B2B business forum under the title "Let Greece Inspire You" with Libyan entrepreneurs to introduce to them Greek companies in construction, energy, and pharmaceuticals.